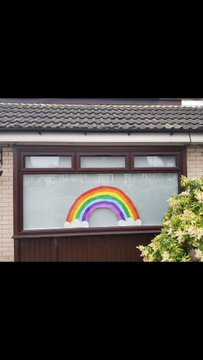 Some of our children have been putting up Rainbows in their windows.  Remember you are allowed to go outside to exercise with your family members – you can walk, run and cycle but don’t get too close to anyone who isn’t in your family.

While you are out and about, see if you can spot other people’s rainbows, and if you like you can draw or paint one for yourself…!!!!  Send a picture to Mrs Mathers for the website if you want – smathers@aberdeencity.gov.uk

Why are people using Rainbows..??

Rainbows are lovely aren’t they..!! They brighten up the sky and everyone stops to look at them.  Rainbows in the sky always make people smile!

Natural rainbows can only happen when it is both sunny and raining – you can’t get a rainbow without both things.  This means many people see the rainbow as a sign of hope – it might be raining now, but there is sunshine there too.

When bad things are happening all around us, and we are scared and worried and things seem awfully gloomy – the rainbow reminds us that even when there is rain, the sunshine is always there too.

We are all worried and scared at the moment, and none of us really know what is going to happen or how long it will last, but if you look there is still sunshine – maybe you are spending time with members of your family that you don’t often get to see…maybe you can play games with your older brothers or sisters that they don’t often have time to do, maybe you are getting an opportunity to practise your typing skills when you are using google classroom.

The rainbow also reminds us that the rain will stop.  When its very rainy and stormy it can feel like it will never ever be dry again, but it always is…the rain always stops in the end.

Believers in Christianity and Judaism also believe that God made a promise to Noah with the rainbow.  There is a story in the Old Testament (In the Torah for Jews) about Noah and his Ark which features a rainbow…

Noah, and The Ark

During Noah’s lifetime, people were acting very wickedly. This made God unhappy. It made Him sad because people seemed to be thinking more about themselves than about God. Noah, however, was a good man. He loved and obeyed God. And God loved Noah very much. God actually loved all the people as much as He loved Noah – but at the time, only Noah was listening to God.

God told Noah to build an ark – a big boat. So Noah followed God’s plan and built a boat that was one-and-a-half football fields long. That’s a huge boat! Noah’s neighbours laughed at him because there wasn’t any water in the desert where they lived. But God told Noah that a great flood was coming. Noah tried to warn the people to change their ways so that they could hear God too. But they wouldn’t listen. They just kept on with their selfish lives.

God asked Noah to collect seven of some creatures and two of other creatures creatures of the earth and bring them into the ark. He also told the animals to find Noah – so it wasn’t hard for Noah to gather them together. The animals were put safely inside the ark before it began to rain. Noah’s wife, and his three sons, and their wives were also safe on the boat. When everyone was aboard, God shut the door.

Noah and his family and the animals lived in the ark for seven days before the first rain drops fell. Then it rained for forty days and forty nights. Soon the earth was covered with water. After it stopped raining, the water continued to rise for 150 days. The ark landed in the mountain range of Ararat during the seventh month of the flood. God sent a big wind and the waters began to evaporate. Noah and the floating zoo had to stay in the ark for several more months while the earth slowly dried out.

Finally, Noah sent a raven out of the ark’s window to look for land. The raven never returned. Noah waited another week for the water level to go down and then sent a dove to do the same thing. The dove couldn’t find a place to rest, so it returned to the ark. Another week passed, and then Noah sent the dove out again. This time it came back with an olive branch. Noah now knew that the water was low enough for a tree branch to show! When Noah sent off the dove a week later, it didn’t return. The dove had found a place to live – on dry land.

Altogether, Noah and his family and the animals lived on the ark for 1 year, 1 month, and 27 days!

It was now time for all the creatures and Noah’s family to move off the ark. Noah and his family and the animals needed to start life over again. After everyone left the ark, Noah prayed to God to thank Him for keeping them safe. Suddenly a bright rainbow filled the sky. This was God’s promise that He would never flood the earth again.